I’m taking my younger daughter to my alma mater for homecoming this weekend.

I have an aerial view of the motel where we’ll stay. I know if I drive the speed limit, we’ll arrive there six hours and five minutes from the time we leave home. I know the structure is less than five years old. I’ve read guest reviews that say it’s a decent play to stay.

I also know that it’s wiser to buy our football tickets at the stadium, from a scalper, than on StubHub. I know this because the opponent is week, and that their fans don’t travel well.

I’ve packed warm clothes because I know the game time temperature will be a sunny forty degrees.

I Google, therefore I am.

I remember the second time I came to campus, for freshman orientation. In particular, I recall a boy who was book-ended by two cute girls as they ambled from one campus building to the next. The trio had the confidence of upperclassmen. They kept slightly separated from the rest of us during our campus tour, barely paying attention to our orientation leader. I overheard them say they had gone to the same large high school in St. Louis, and they seemed so comfortable in their new home for the next four years.

I was Mr. Recent North Podunk High School graduate. I wasn’t sure I could find my way back to my car, let alone the appropriate classroom buildings again. The St. Louis Three must have read the pamphlet  How to Act Like You Own the Place Your First Day on Campus. My copy got lost in the mail. I was an ignorant kid from the sticks.  Eighteen years old with an IQ to match. That was a blessing. I didn’t know what I didn’t know.

I occasionally miss that state of mind. If we don’t know something, we can find the answer quickly.

My older daughter is applying to colleges. The process has been relatively sane so far, but I know there are some kids, with parents coptering over them, who have three-inch thick dossiers on all the best colleges in the Northern Hemisphere, as well as appendices on the deodorant and toothpaste preferences of each university president. 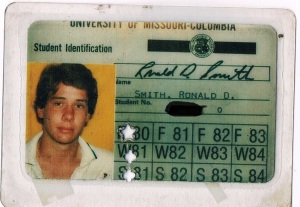 There can be no surprises, nothing left to chance.

For my freshman orientation, I packed a few clothes in the little vinyl suitcase I’d gotten as a graduation gift and made the 3 ½ hour drive to campus, alone. It became immediately clear that everyone else at orientation had come with their BFFs. Many parents were hovering around, too. It hadn’t occurred to me that I should bring a posse. I didn’t know what I didn’t  know.

Those three kids from St. Louis particularly were bugging me. Because they were pre-journalism students like me, I saw them often as we acclimated to campus those two days. They were relaxed and seemed sure of themselves, as though coming to college was as easy as going out for a Big Mac. I still had clover seed stuck in my hair.

One of my first college friends attended a huge high school in one of the most affluent areas of the state. His senior class was bigger than my home town. He knew how to appropriately use big words that I didn’t yet know existed. He was trying to get into Journalism School, too. A semester and a half later, he flunked out. I, unencumbered by informed self-doubt, moved ahead.

I still think occasionally about those three confident kids from orientation. It was a big campus, making it easy to go four years without bumping into them. However, I saw the boy a few months into our freshman year. He looked like a deer caught in headlights. I never saw him again. I occasionally saw one of the girls he had been with. She asked me out on a date our senior year.

2 thoughts on “In defense of ignorance”

Error: Twitter did not respond. Please wait a few minutes and refresh this page.